Breaking New Ground in the Study of Religion 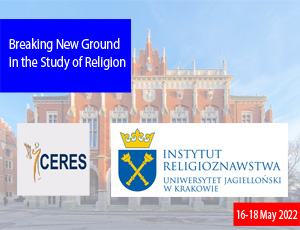 Elżbieta Przybył-Sadowska, the Director of the Institute for the Study of Religions

Volkhard Krech, the Director of the Center for Religious Studies (CERES)

Joanna Krotofil       Changing metaphors at the intersection of mothering and religion

Krzysztof Mech       The greatness and poverty of the metaphor

Małgorzata Sacha  Healing by metaphors: the spiritual trauma and how to cure it

Jessie Pons               Buddhism in Bytes: The Reception of Digital Heritage in South Asia

Researchers associated with the cognitive science of religion paradigm (especially J. L. Barrett and D. J. Slone) have shown that people use many different models of religious phenomena. These models form a continuum that ranges from simple, concrete, and spontaneous concepts to complex, abstract, and learned concepts. In typical circumstances, people, when asked about their religious beliefs, refer to advanced theoretical models so that their answers are consistent with the approved and learned theological views (the principle of theological correctness). In practice, however, very often the same people think about the domain of religion using spontaneous and simple models (folk or naïve models), which often contradicts an official doctrine.

Both the theological incorrectness of simple, spontaneous models and the self-censorship make them relatively difficult to study. However, the theory of conceptual metaphor developed by G. Lakoff, M. Johnson and their successors comes to the rescue. It allows us to describe the naïve models of the sacrum present in spontaneous statements of religious nature as metaphorical idealized cognitive models. As a result, we gain knowledge about the conceptual metaphors that constitute the models, along with the characteristics of their source domains, the components of these domains and the directions of their mappings. Moreover, the same method of analysis can be used to describe theological models, which allows for systemic comparisons of spontaneous and folk concepts of the sacrum with official and theoretically advanced concepts.

The talk presents and discusses kinetic metaphors (primarily, motion verbs and logically related verbs/nouns) within a short Chinese text known as “Inward Training” (fourth century BCE), a key-document in the history of Daoism (Roth 1999). By means of the annotation tool developed within the SFB project “Metaphors of Religion”, the talk shall first try to identify the main features of the metaphoric use of kinesis in the text. As a second step, the talk shall look for a boundary line between the well-known cognitive dimension of kinetic metaphors (among others, Lakoff and Jonson 1980; Lakoff 1987; Lakoff 1993) and the development of argumentative strategies that focus on the pillar of the Daoist worldview: the idea of the Way (dao).

Digital research methods allow for two things in religious studies: On the one hand, they provide a way to deal with the increasing volume of data – or: datafied source material – that is available to scholars of religion. On the other hand, even the analysis of small samples fosters a kind of systematization of research questions that is rooted in the process of operationalization. This talk discusses these questions using examples from a project on metaphor use in religious online forums.

The Heart as Metaphor of the Self in the Hebrew Bible

Among anthropological notions of the Hebrew Bible related to self-reflection and self-constitution, the “heart” plays a key role. It stands for inwardness as well as metonymically for the person. As far as the constitution of the self is concerned, the fact that cognitive, voluntative and emotive aspects are intimately intertwined and interrelated within the “heart” is especially important. The central position of the heart is expressed not least in a large number and variety of metaphors, blended metaphors and metaphorized metaphors. No other bodily organ displays such a richness of metaphorical usage and is as metaphorically charged as the “heart”, e.g. in a broken heart, melting heart, a heart of stone, the tablets of the heart, and the circumcision of the heart. It is especially the inner-outer-boundary of the inner human being that comes into play here. The paper introduces the metaphorical use of the “heart” in the Hebrew Bible and elaborates about the conceptual link between metaphorization and individualization.

Group project: The Image of Religious Minorities in the Polish Press (1989-2020). Creation of a Digital Collection of Press Materials and their Analysis with Methods of Digital Humanities.

This project aims to establish a digital collection of press materials dedicated to religious minorities, published in Polish press in years 1989-2020. This will be followed by a content analysis of the way in which those minorities are presented, using methods of digital humanities. Press materials will be gathered from nationwide, high-volume magazines, published both daily and weekly. We will study, among others: the frequency of publications dedicated to particular minorities, the way of their valorisation according to the medium, the historical and social context of the publication and the use of particular journalistic genres applied to minorities description (including language and iconography).

International scholarly cooperation comes in many shapes. It starts with colloquial exchanges at conferences, goes on to co-authored publications, and can even lead to large-scale collaborative research projects involving multiple scholars from both sides. While options for funding on a smaller scale are manifold (e.g. extended fellowships at partner institutions for guest researchers), funding for international large-scale projects is rare and difficult to obtain. In this presentation, I will discuss the existing options in light of the shared research interests of the Bochum and Krakow sides.

The talk will introduce a new collaborative project, namely the Collaborative Research Center (CRC) on "Metaphors of Religion: Religious Meaning-Making in Language Use", situated at CERES. The CRC starts from the assumption that religious meaning-making occurs in and through metaphors. In metaphors, meaning is transferred from one semantic domain to another. Religion, which can never put its ultimate subject (the transcendent) directly into words, is especially dependent on this procedure. In addition, the lecture will give an overview of applied techniques, including digital humanities techniques.

Buddhism in Bytes: The Reception of Digital Heritage in South Asia

This talk examines a selection of projects dedicated to the digital preservation and study of Buddhist material culture (i.e. sculptures, sites and painting) in South Asia. While digital tools may advance our understanding of these corpora and foster accessibility to objects that have often been divorced from their communities of origin, they also pose new challenges. By focussing on the reception of the projects in South Asia, this contribution will explore how digital corpora become enmeshed in the negotiation of religious identities and national discourses.

Changing metaphors at the intersection of mothering and religion

In this talk I will briefly outline my current research on the experiences of religious (Catholic and Muslim) women in their transition to motherhood.  I will focus on the recurrent interpretations of the central elements of early motherhood, such as the conception, gestation and birth, as mother’s participation in the act of creation. The preliminary results of the project  provide insights to the manifold ways these mothers try to grasp and place the distinction between immanence and transcendence within their experiences. Their stories also reveal how they (variously) position themselves in relation to different religious figures: for example, to Catholic saints, Virgin Mary, God – the Father, God –the Creator. The meaning making within maternal and religious domains seem to be inherently linked, embodied and embedded in religious and mothering practices. Some mothers, for example, attribute the Virgin Mary with new powers and traits on becoming mothers, and as mothers, develop, what they see, as a more intimate relationship with the Mother of Christ. God – the Creator becomes somewhat less radically transcendent, through some mothers’ subjective participation in the act of creation. This opens the question if the women have access to metaphorical language to accommodate the sense of greater closeness to God? Do the metaphors of God used in individual accounts change?  If so, in which contexts is this change enacted? Can it be captured with the existing methods?

The greatness and poverty of the metaphor

Healing by metaphors: the spiritual trauma and how to cure it

Spiritual trauma is a real and complex trauma that results in all known psychological consequences of any trauma experienced outside the religious or spiritual context. It is often perpetrated simultaneously by one individual, and the community group or institution at the same time. The person abused in a spiritual or religious context, especially when the abuse is perpetrated by a religious official, additionally suffers confusion as to who the abuser actually is: the human, the representative of the deity, or the deity himself. This uncertainty translates into emotional confusion and ambivalence of the sufferer in his or her assessment of oneself, the other person involved (a group, an institution), and the traumatic event itself: on the one hand, the person experiencing the trauma feels guilty and fears of rejection and final punishment by the deity, on the other hand, he or she feels betrayed. This article presents the basic problems encountered in the psychoanalytic psychotherapy of people who have experienced trauma in a spiritual  or religious context. A key element of such therapy is that the patient finds an adequate metaphor or metaphors that express his or her traumatic experience. In the final part of the article, examples of the use of metaphors taken from the author's clinical practice with patients abused in a religious context will be given.

Of the four major Buddhist traditions in Tibet, the Kagyupa teach a system of meditation called “the great seal.” Several methods have been developed to deal with thoughts within this particular system. The main problem is whether the practitioner should stop thoughts altogether and remain in such a state without thoughts or whether thoughts—movements of the mind—should be integrated into the meditative practice. Analyzing an Indian ca. mid-11th c. text in Tibetan translation and a Tibetan early 14th c. commentary, I have found that the first presents only the method of stopping thoughts. In contrast, the second additionally introduces the other method of integrating thoughts. Interestingly, both methods prefer particular sets of metaphors so that it becomes possible to search through large amounts of digitized texts and identify texts and authors that are likely candidates for the one or the other approach.

Applying the tools of cognitive linguistics for the research on religion and religiosity in modern Europe poses specific challenges. As pointed out by a number of sociologists, religion is increasingly becoming the subject of in-depth reflection, which is one of the reasons why the narratives created by many contemporary European Christians prove to be a difficult material for analysis (tools developed in the cognitive paradigm are particularly useful in the study of pre-reflexive scripts and meaning-making mechanisms). Furthermore, religion problematizes the very question of reference and the creation of meaning, which are central to cognitive linguistics. The notions of metaphorization, symbolization, sign and meaning appear in the discourse of lay Christians. The talk presents several conceptualizations of "religious and ritual reference" reconstructed on the basis of interviews with lay Catholics from the Polish Podhale region and discusses some challenges in collecting and analyzing data.