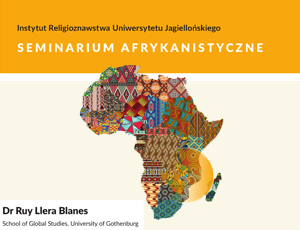 In this paper I propose to debate the public role of religion in contexts of social and political upheaval. Using as case in point my work on religious movements in Angola, and with an extension to other examples across Africa, I will explore the epistemological validity of religious discourse and praxis vis-à-vis its societal envelope, in particular when confronted with situations of sociopolitical transformation and of oppositional logics – from civil war to contexts of violence and repression. This reflection will imply a subsequent reflection on issues of religious participation in public space, governance and political agency.

Ruy Llera Blanes is a Senior Lecturer in Social Anthropology at the School of Global Studies of the University of Gothenburg. His current research site is Angola, where he is working on the topics of religion, mobility, politics, temporalities, and knowledge. His publications include A Prophetic Trajectory. Ideologies of Place, Time and Belonging in an Angolan Religious Movement (2014) and the volume The Social Life of Spirits (2013, edited with Diana Espírito Santo). He is also co-editor of the journal Advances in Research: Religion and Society.