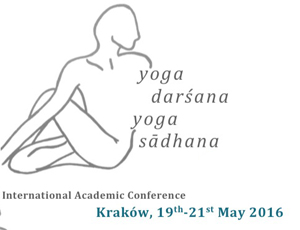 The Jagiellonian University Institute for the Study of Religions and the Modern Yoga Research group invite you to participate in the International Academic Conference "Yoga darśana, yoga sādhana: traditions, transmissions, transformations".

The conference was conceived in response to the most recent developments in yoga research at various institutional levels. The aim of the event is to showcase and advance contemporary research on yoga. By bringing together an international community of researchers we hope to both initiate and to continue substantial discussion on the subject, taking into account the polysemy of the term yoga and the historical developments of the phenomena it designates.
Yoga can indicate, among other things, a philosophical system, a set of physical, mental or devotional techniques aimed at achieving liberation from cycles of rebirth, union with a deity or ultimate reality, extraordinary powers or even bodily immortality. In the contemporary world, yoga also designates a globalized wellness practice, associated with notions of 'spirituality'.
During this conference, we would like to focus on yoga in both its textual and performative aspects, drawing attention to the dialectical relationship between the two. We are also keen to discuss methodological approaches to the study of yoga. We aim to provide ground for interdisciplinary discussions involving, amongst others, indologists, scholars of religion, philosophers, philologists and linguists, anthropologists, sociologists, and historians. Last but not least, we are hoping to offer the non-academic public and yoga practitioners a nuanced, research-based insight into these complex topics.

The keynote sessions: "traditions, transmissions, transformations"
To give a coherent structure to the conference, we chose three key themes. Although we do not expect these themes to be tightly interwoven into all paper proposals, we used them, in consultation with the keynote speakers, to orient all keynote sessions. Each session will feature one or two scholars, who will tackle issues related to the modes of establishment of yoga traditions, modes of their transmission, and their transformations in modern and contemporary contexts.

The keynote sessions will feature:
Michel Angot (EHESS, Paris) and Philipp Maas (University of Vienna), who will discuss patterns of emergence of Sanskritic traditions with special reference to problems of authorship in relation to the Patañjali system of yoga.
James Mallinson (SOAS, London) and Jason Birch (SOAS, London), who will discuss the transmission of yogic methods and theories in early and late medieval haṭhayoga texts, with special reference to āsana.
Federico Squarcini (Università Ca'Foscari, Venezia), who will discuss topics related to modern and contemporary, global and local transformations of yoga, with comments on their ideological, historical and socio-political contexts. (Possible other discussant: TBA).
A short list of recommended readings will be provided in advance for each keynote session. All references will be listed on the conference website in due course.

We invite you to submit paper proposals related to the following thematic fields (which may incorporate any or all of the three aforementioned keywords). Please note that the list is not exclusive:

* Earliest forms of yoga; earliest uses of the term * Yoga-related textual traditions * Yoga-related performative traditions * Cosmologies, ontologies, anthropologies of yoga * Haṭhayoga as a textual and as a performative tradition * Yoga and tantric traditions * Non-Sanskritic and/or non-Hindu yoga texts and traditions * Yoga and concepts of the body * Yoga's long-distance transmissions and patterns of interaction and modelisation: the Sanskrit cosmopolis, Asian trade routes, South Asian cross-influences * Yoga and colonialism * Yoga and South Asian ascetics * Contemporary yoga movements and ideologies in India and in the Indian diaspora * Modern and contemporary global and local yoga movements and organisations in analytical perspective * Methodological approaches to yoga research * Yoga and ritual * Yoga and gender * Yoga, the history of science and scientific methodology * Medicalisation of yoga * Modern yoga and consumer culture.

Submission guidelines:
Please submit proposals through the conference website (www.ydys.confer.uj.edu.pl). The time scheduled for paper presentations is 20 minutes, with 10 additional minutes for discussion and questions. Papers should be presented in English. Each paper proposal should include:
•Name, affiliation, and degree(s) of the author/presenter
•Paper abstract in English (not longer than 1,400 characters with spaces or 250 words). The abstract should demonstrate how the proposed paper can contribute to existing academic research on yoga.
A short list of references may also be included in the proposal (not included in the word limit).
Please do not submit multiple abstracts; only one abstract per person will be considered.
Proposal submission deadline is 21st December 2015.
For questions and information please contact: ydys.confer@gmail.com
Proposals will be evaluated by the organising committee by 26th January 2016.